Artisanship and Premium Prices in the Digital Age

“Once you decide on your occupation... you must immerse yourself in your work. You have to fall in love with your work. Never complain about your job. You must dedicate your life to mastering your skill. That's the secret of success...”  – Jiro Ono (Jiro Dreams of Sushi) 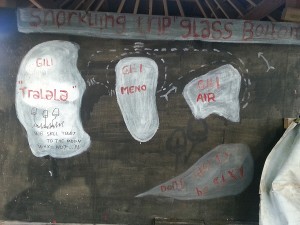 For the past two months, my wife and I have been traveling around South East Asia.

We’ve spent the majority of our time in Indonesia, with a one-off stop in Singapore for a long weekend (flights were $9 and we needed to renew our Indonesian visas, so it was a no-brainer).

Toward the end of our time in Indonesia, we made a trip to the Gili Islands, just off the coast of Lombok.

Each island has its own unique atmosphere (Gili T is more party, Gili Mano is basically undeveloped, and Gili Air is that quiet middle ground, more suited for honeymooners or people who prefer less crowded locations but all the essential amenities one might need while visiting an island paradise - like Wi-Fi).

We decided to spend the majority of our time on Gili Air.

Artisanship on an Island Paradise

I knew this place was different the moment our wooden boat floated up to its sand and coral beaches.

Unlike most Indonesian cities (and most SE Asian cities for that matter), instead of being greeted by hundreds of taxi cab drivers looking to take all our money (we stand out here), we saw a dozen horse drawn carriages lining the street with not a single moped in sight (again, for SE Asia, this is bizarre).

Courtney and I had done our research, though – Gili Air is only a few square kilometers, meaning everything is in walking distance.

So we started walking.

We had no set plans or booked reservations – we normally wing our travel and this was no exception.

As we walked along the half-cobble, half-sand roads, we were greeted with the standard set of Indonesian idiosyncrasies (smiles, laughter, offers for a place to stay or eat, and lots of ‘mista’ and ‘boss’ thrown into their sentences for good measure), and passed by dozens of independently owned and operated shops.

One shop in particular caught my attention. 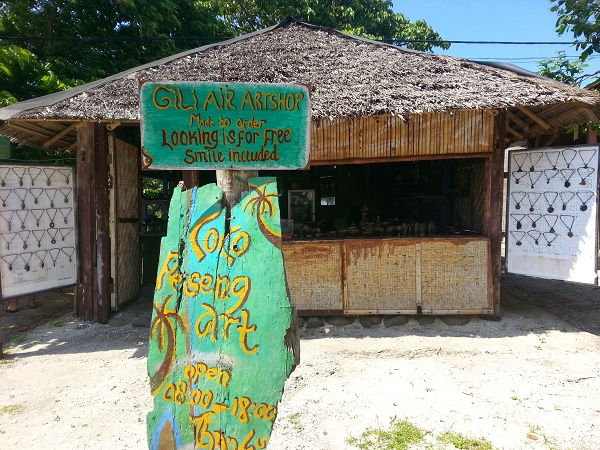 A little hut, just off the side of the main road (there’s really only one main road in Gili Air), with a sign that read:

Gili Air Artshop Made to Order. Looking is for Free, Smile Included.

But it wasn’t the warm, inviting sign that drew me in; it was the man sitting outside the shop, hacking away at a coconut that did.

His name is Nin.

Nin is an artist.  He carves, paints, and constructs things from wood and other natural materials.  Today, he is carving a necklace out of a coconut.

Watch him work for just a few minutes and you realize a few things:

1. Nin is a professional.  This is his life.  It’s what he does every day for hours a day.  His craftsmanship shows.

2. Nin is an artisan.  He works with his hands to bring his vision to life.  And he’s skilled at it.

3. Nin’s workshop is sustainable in the perfect sense of the word.  He uses discarded wood and coconuts to make his art.  This isn’t for marketing purposes – it’s out of necessity.

Naturally, I had to buy something from Nin. 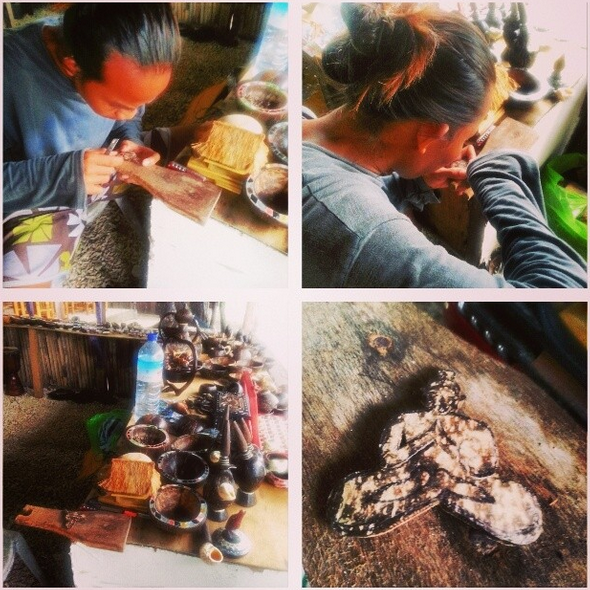 Depending on how you view it, it might seem like I got ripped off.  Relative to prices on the island, 200,000 Rupiah is quite a bit of money.  And I never bartered (something you’re supposed to do in Indonesia).

Of course, after watching him work, I didn’t want to.

He spent three days carving this necklace from a coconut shell.  Every day, I watched his progress, forming something from (essentially) nothing.

The Artisan in the Digital Age

I tell this story for a reason.

First, to point out that artisanship still exists.  All over the world.  And many people just like me are willing to pay a premium for it.

And second, to beg the question:

In the beginning of this essay, I quoted Jiro Ono, a sushi chef made famous from a little documentary called Jiro Dreams of Sushi.

He lives and breathes the perfect sushi dish.  He’s been doing it every day for over 70 years and will continue until he physically can’t.

He does because he can - because people want to see a master artist at work.

We’re naturally drawn toward those who perfect their craft, who’ve weathered the inner creative battle for decades and come out on top.  And we’re happy to pay a premium just to be in their presence (Jiro’s sushi shop is booked months in advance).

Again, this might solidify the idea that artisanship only exists in the physical realm…

Until I think about how I heard of Jiro.

I’ve never met Jiro in person, nor been to his sushi restaurant.

It was a documentary – a digital download - that brought his work to my attention.  It was this medley of pixels, gigabytes and high resolution that shined a light on his work and his philosophy.

The digital world made this message possible to spread.

And no other medium could have delivered the message with more impact.

We’re Waiting to Pay You a Premium

As entrepreneurs, creators and instigators in the 21st century, a very big part of what we do is online.

Yet instead of killing off what is left of artisanship, I honestly believe it’s helping to grow and expand the roll of the artisan (just listen to some of the interviews I've done with true digital artisans like AJ Leon and Dan Adams, among others) .

The roll of the artisan is expanding.

The question isn’t one of accessibility or ‘how’ – anyone can be one if they choose.

The question is: are you willing to put in the hours, days, and years (and the sweat, blood, and tears) to create the perfect product or service for the people who matter - the ones who want to hear from you?

Start today - before you're ready.

And we’re willing to pay a premium.

Started in Gili Air; thrashed in Sydney; finished and shipped in Perth, Australia (while listening to the song Perth by Bon Iver)

Want to support Artisanship in the 21st century?  Subscribe to The Creative Entrepreneur and support an artisanal publication while helping fund entrepreneurs in developing countries.

3 comments on “Artisanship and Premium Prices in the Digital Age”