The War in Your Brain 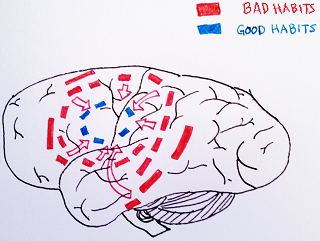 Right now, as you read this, the nerves in your brain are battling one another for territorial command of brain space.

In fact, if you continue to read this (and all the other blog posts I write), you’re helping one side dominate the other (the nerves associated with reading, learning and instigating).

Who are these nerves fighting?

They’re fighting the multitude of bad habits you've accumulated over the years.  Things like smoking, comfort eating, spending money you don’t have, staying home instead of going for a run, watching tv instead of writing…the list goes on (and on, and on).

Every single one of these actions represents a series of nervous system input (reaching for a cigarette, lighting up, inhaling deeply, etc.).  The more consistent time you spend on an activity, the larger its brain territory becomes.

“If we stop exercising our mental skills, we do not just forget them: the brain map space for those skills is turned over to the skills we practice instead.” - Norman Droidge [The Brain That Changes Itself]

Over the course of 20 years of bad eating habits, you have terrain completely dominated by the enemy.

Control over the Territory

Every time we repeat a bad habit, it gains more control over the map.  The territory expands and the territorial lines strengthen.

On the flip side, you may have good habits you'd like to build on or new habits you'd like to start (workout more, eat healthier, learn a new language, write a book, start a business), but they control so little territory it’s like trying to take over China as the commander of Monaco.

The reason it’s so hard is because we’ve had the habit of starting ground out of us.

If you’re like most people, the habit of hiding replaced your natural instinct to start.  Instead of being encouraged to instigate, we became masters at hiding.  We’ve had lots of practice too: hiding in the back of class; hiding from advanced placement; hiding by taking 7 years to graduate college with a bachelor’s degree; hiding by going with the crowd, never trying to stand out, and never testing the limits of our own abilities.

This habit of hiding (of avoiding starting at all costs) is costing us our sanity, our happiness, and our self-respect.

We want desperately to begin, to build good habits, but we’re fighting decades of bad habit.  By now, our maps are almost entirely controlled by our bad habits.  Trying to reconquer the territory is a serious undertaking, something that takes more than a day and more than good intentions.

If you want to take back control of your brain territory, you have to understand you don’t have the upper hand, all momentum is in the opposite direction, and you will be fighting an uphill battle.

To take back territory, you need to play by the rules of the brain map insurgent:

Don’t try to regain control over every territory at once.  It won’t happen.  You’ll lose focus and your bad habits will crush you.  Focus on one specific area.  Use the power of concentrated effort to break through enemy lines in order to gain a foothold before you move onto something else.

If you want to eat healthier, manipulate your environment to make it easier.  Get rid of junk food.  Never go shopping for food hungry.  Only keep food in the house that you consider healthy (sorry, no hiding snacks).

For the first few weeks, focus all your effort on getting control of this territory before moving on to something else.

The only way to break through enemy lines and expand friendly territory is through consistent, daily action over the course of 4 weeks.  That’s right, 28 days.  This is the amount of time it takes for the neural pathways to strengthen and for the action to go from an activity to muscle memory.

Similarly, when we perform an action that requires multiple motor movements (or multiple sensory inputs), the brain maps these neural pathways close together.  Running, for example, requires multiple inputs from various body parts, but the composite action is mapped locally on the brain.

You can apply this knowledge by building good habits on top of other good habits.  Have you already created a habit out of waking up early?  Expand on this good habit by sitting down for 10 minutes to write before work.   Your brain will begin associating early rising with writing.

After 28 days, expand topographically again: spend 30 minutes writing, or focus on making a healthy meal before you sit down to write, or after writing, go for a quick 15 minute run.

The Art of Instigating

Understanding the brain, how neural pathways strengthen and weaken, and how focus and repetition expand brain map territory, is the science behind what I talk about on this blog and the cornerstone to my concept of the art of instigating.

If you don’t develop the habit of starting, you won’t be successful – period.

Every single successful person in the world (whether you measure success in terms of money, fame, happiness, or by some other criterion) has developed the habit of starting – they’ve made instigating a way of life.

Empires aren’t built in a day.

Create the habit of starting, learn the art of instigating, and build the empire you’ve always wanted to build.