[infopane color="1" icon="0101.png"]Last week, I wrote a post about overcoming drag. Today, I want to dig deeper into drag itself, its cause and effect, and the only way to avoid drag entirely.  Thanks to Alan at The 365 Effect (twitter: @the365effect) for the inspiration.[/infopane] 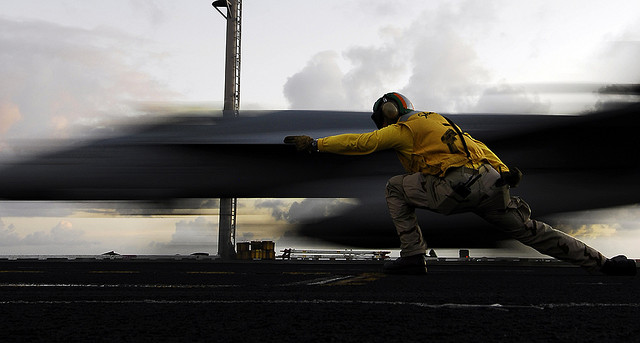 Drag, in relation to flight, is a mechanical force that acts against the force of the aircraft as it flies through the air.

Drag can cripple your goals and bury your project.

Whether you’re writing a book, building a business, or starting a revolution, you will experience drag.

Drag hits hardest when we’re deep inside the creative war – when we’re experiencing the isolation and loneliness of creation.

Drag is easy to recognize: you will notice it when you start questioning why you’re doing what you’re doing and when you begin putting work off until “later.”

Later is one of the most destructive words in the English language; when we let it enter our vocabulary in regards to our project or goals, it’s a clear sign we’re experiencing drag.

The Physics of Instigating

Drag is essentially the compounding and cumulative effect of the Enemy’s Negative Self-Talk Propaganda.

This is because drag itself is an indiscriminate reaction to instigation.

Newton’s Third Law states: “to every action there is an equal and opposite reaction.”

The equal and opposite reaction to instigating is drag.

When an aircraft flies, the force of the jet engine meets with aerodynamic friction.    This friction, like all friction,  is a reaction to things that challenge the natural repose (see: sedentary state) of our environment.  So anytime an aircraft takes off, it experiences friction (in other words: drag).

Like the aircraft, when we take off (instigate), we experience our own type of drag.

There is a big difference between the natural state of a thing and its intended state.

The aircraft, by its nature as a physical object, bound and limited by the physics of the world, should stay grounded.  If the aircraft stays grounded, it experiences no friction, no drag whatsoever.

Interestingly enough, while staying grounded is the aircrafts natural state, it was not designed for this.

The aircraft is designed to fly.  It is the intention of the designer for the aircraft to fly, to stay ungrounded, and thus experience the friction and drag created from flight.

In a way, the intentional state of the aircraft is to challenge its natural state.

By its very existence, the aircraft is an act of defiance.

The Intentional State of the Instigator

The human being, by his nature as a physical being, should stay grounded.

But like the aircraft, human beings weren’t designed for this.

When we instigate, we automatically move in opposition of the status quo, challenge the tribe, and become outliers.  By instigating, we are creating a force that must, by its nature, experience drag.

The intentional state of the human being is to challenge his natural state.

We are, by our very existence, an act of defiance.

One Surefire Way to Avoid Drag

It follows then, that the only way to avoid drag is to stop instigating; it’s to cease moving against the current and instead move with the current.

People who don’t set goals, who go with the flow, and who let life happen to them rarely, if ever, experience drag.  The only time they might experience drag is during those fleeting moments when thoughts of what could be enter their mind; but this experience of drag is just as short lived as their dreams.

So, if you want to avoid drag entirely, simply stop creating.

For the Rest of Us

We’ll continue to instigate, to create, to do bold things.

And yes, that means we’ll experience drag, but that's a good thing; it means we're moving against the current.